You need to enable JavaScript to run this app.
Sports
Yue is Awesome
Cole Horton '14 Editorial Associate
February 6, 2013
No Comment 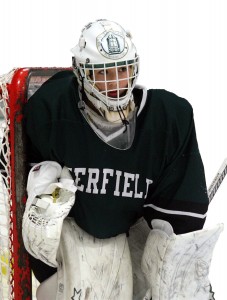 Emily Yue ’16 has achieved notable success in her hockey career at Deerfield and beyond, including a spot on the Chinese Olympic team competing in 2014.

Yue, who has played competitive hockey for eight years, is excited about this wonderful opportunity and the challenges her team will need to overcome in order to qualify for the Games. “We’ve been knocked out of the qualification rounds this year, so we have to win the preliminary rounds in February in order to make the Olympics.

In preparation for these obstacles, Yue plans to play during the offseason to keep her skills sharp. “During the summer, the [Olympic] team usually comes to Canada or the States, and I practice with them while they’re here. I also play field hockey during the fall and am going to be competing at nationals with a club team in the spring.”

However, the road to even competing for China in the next Winter Olympics won’t be easy. Since Yue doesn’t speak Chinese, it’s harder to communicate with her teammates both on and off the ice. As of now, Yue has not gained Chinese citizenship but will most likely do so before 2014.