The Little Shop of Horrors, Deerfield’s first musical in the Large Auditorium in 20 years, opens tomorrow at 7 p.m. and goes until Saturday. Performing in one of the school’s costliest shows ever (the Broadway tour plant rentals cost around $10,000), 17 cast members will pay tribute to the Memorial Building before it undergoes renovation in June.

Director Catriona Hynds said she chose the show in response to a “strong campus-wide desire” for a musical.

“I chose Little Shop because I think the story is wonderful— dark, funny and creepy,” she said. “I love the characters and above all, I think the music is brilliant.”

The show focuses on a demonic plant that grows throughout the musical. Connor Manson ’14 maneuvers the plant, which weighs 180 pounds by Act II.

“All I have to do is stand up and lift the plant, which is attached to me like a back pack,” he said. “Then I bend my knees and push down on two bars inside the plant to make it speak. I feel most of the weight on my back and shoulders, so it gets difficult to maneuver after a while.”

Manson said the biggest challenge was to time movements with Chris Lin, the voice of the plant.

“I have to make the plant look like it’s really alive and talking,” Manson said. 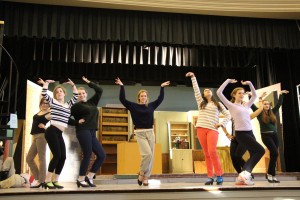 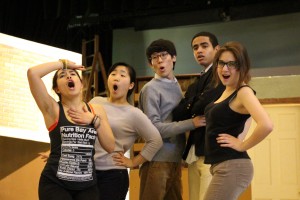