You need to enable JavaScript to run this app.
Editor's Picks
Boys’ Squash Bumps up to Division I
Cole Faulkner '15 Staff Writer
February 27, 2013
No Comments 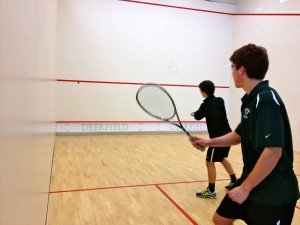 Three years ago, Boys Varsity Squash played in the fourth division out of seven at the U.S. High School Squash National Championships. Now recent success has propelled the squad into the top 10 teams in the nation.

Its members have been playing exceptionally this year with a 13-3 record, earning them an invitation to the Division I National championships at Trinity College (CT). Unfortunately for the boys, this year’s Nationals was cancelled due to Super Storm Nemo.

Four-year player and team captain Teddy Henderson ’13 said the team was disappointed in the missed opportunity to compete.

“We were really looking forward to it; we all were really bummed when it was cancelled,” Teddy Henderson ’13 said.

Despite the cancellation, the team has been successful, seeded 5-8 out of the top 16 teams in the country. This spell of success is largely attributed by some to the recent recruitment of talented players.

“My freshmen year we weren’t as strong, and it was really last year when we got a couple new recruits in Connor Henderson ’15, Tad Huffard ’15 and Jamie Kjorlien ’15 that we really started to progress,” Thomas Cowan ’13 said.

In addition to the three young recruits last year, the team’s current number one seed, Osama Khalifa ’14, has been a driving force in the squad’s accomplishments this season.

“Having Khalifa at the top of the ladder helped a lot because it brought everyone down one spot,” Cowan said.

Khalifa himself was quick not to take sole credit for their success this season, and stressed the fact that their achievements are the outcome of team efforts each match.

“It has been such a privilege to be a part of this team, and I’m elated that this year we will play in Nationals as a Division I team,” Khalifa said. “Everyone on the team, from number nine to number one, has worked really hard.”

There is a chance the National tournament will be rescheduled to a later date, but even if it isn’t, the boys squash team looks to have a bright future.

“I think the team will definitely continue to improve over the next couple of years. We’ve got some great young players, and we are becoming a more attractive school for some of the top young players around the country and even the world,” Henderson said.