You need to enable JavaScript to run this app.
Sports
A Look at the Stockroom Legends
Emily Mahan '15 Staff Writer
February 27, 2013
No Comment 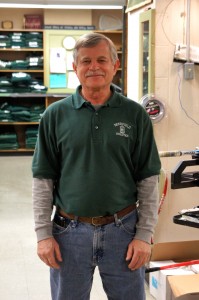 For most Deerfield students, afternoons are filled with athletics of some sort—and this often means running into Susie Driver, Norm Therien or Bernie Motyka, staff members in the athletic stockroom.

They are responsible for much of the preparations and work that might not come to mind when one heads off to sports.

“On an average day, I come in, check voice mails, emails, equipment and meet with vendors,” Bernie said. “It varies a lot day to day. Right now most of my time is taken up by swimming and setting up their equipment. It varies season to season.” 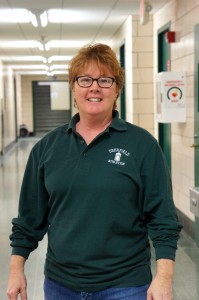 Likewise, Susie and Norm spend their time at the windows of the stockroom collecting, cleaning and passing out laundry, uniforms and towels for sports practices.

“I’m responsible for all of the girls’ laundry and getting their equipment and uniforms ready for the games,” Ms. Driver said. “I man the window and act as a visiting team ambassador.”

With a combined total of over 40 years in the athletic stockroom, Bernie, Susie and Norm not only help athletics run smoothly, but also get to know much of the student body.

“I’ve been here for 30 years, and I’ve watched the generations go. There are kids here whose parents I knew, and members of the faculty who I knew from when they went here,” Norm said. Although neither Bernie nor Susie has logged as much time working in the athletic stockroom as Norm, they said they love their jobs as much as if they had. 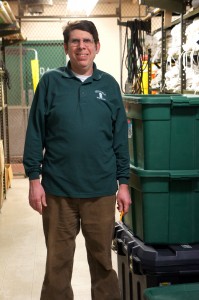 “I love seeing the girls here every day and listening to their stories and talking,” Ms. Driver said. “I would do anything in my ability for them. That’s my favorite part of the job.”

“I love the kids,” Bernie added. “I like the student energy from the athletes, even from the first day back on campus. Students are more themselves here than at other places.”