You need to enable JavaScript to run this app.
A&E
Rivera and Taylor Film “With You”
Jon Victor '14, Editorial Associate
November 13, 2012
No Comment 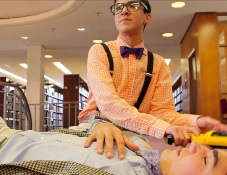 Daniel Rivera ’13 has taken a co-curricular exemption this fall to produce his second music video for a song he wrote this summer called “With You.”

“I did something similar in the spring,” Rivera said. “I had written a song about a year ago, and I wanted to film a video for it. I came up with a storyline that was kind of true to what the song was about, and then we got cracking. I loved doing it, and I really want to see something similar this year.”

He added, “In the spring of my junior year, I had no time, and neither did anyone else, so it was really stressful. This fall I talked to Ms. Creagh, and I applied for an exemption and got it. I’ve had more time to work on this one, and there are so many more people involved.”

Rivera has asked Sofi Taylor ’13 to help direct, film, and edit the play. 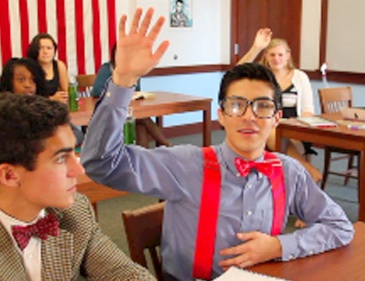 “Daniel knew that I had gone to film camp this summer and that I wanted to take an exemption to make my own movie, and so when he asked me about his video, I thought it was a good idea,” Taylor said. “Daniel had a basic idea of what he wanted, so we went and talked through it and changed a couple of things.”

The music video deals with a love triangle between three high-school-aged boys, and is based on Rivera’s true experience.

“In the other song I did, there is a sort of storyline that follows along with it, but this video doesn’t really have anything to do with the song. We wanted to make it funny and cute,” Rivera said.

In addition to directing the video, Rivera stars in it alongside Colton Dana ’13 and Adam Philie ’13.

“Daniel pulled me aside and asked me to be a part of his video, and I said I would, because he’s my friend and I wanted to help him out with his project,” said Adam Philie ‘13, who plays a lead role. “I think there will be admiration for both Daniel and Sofi’s artistic talent. They both worked really hard to direct and set this whole thing up.”

Nick Goss ’13 plays the role of one of the bullies in the film.

“I responded to [Daniel’s] mass email and said I was interested,” he said. “I ended up being the tough guy who beat up the nerd.”

Rivera plans to have the video completed after Thanksgiving break and will probably release it sometime during Christmas break.

“I’ll put it on Youtube and Facebook and hope that the other cast members share it too,” he said. “If people like it, then maybe I’ll show it at the Widdies, “but I don’t know yet.”