You need to enable JavaScript to run this app.
Features
Students Relay for a Cause
carly reilly 12 staff writer
May 26, 2011
No Comment 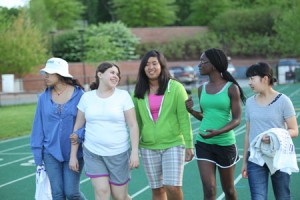 Slow but steady increase in cancer victims, the number of mortalities rising annually until 2010’s peak of over 1,500,000 deaths. As the numbers mount, researchers push harder to find the much sought-after cure—the elusive remedy that seems to make its way into every conversation about what America’s future generation must accomplish.

As the nation’s youth gear up for the challenge, many kids are starting the awareness-raising process early—young children joining parents and friends in the popular Relay for Life fundraiser. On Friday, May 20, Deerfield Academy hosted its own Mini-Relay for Life from 4 to 9 p.m. out on the track.

Prior to the event, Claire Hutchins ’12 planned ways to aid the affair. “It’s such a great cause,” said Hutchins, who, alongside co-captain Andrew Slade ’12, formed the team “Chutch and Slade Fight Cancer.”

Their group of about 16 students hoped to raise $1,000 by the advent of the relay. Their fundraising method included helping curb the 10 p.m. hunger pangs by selling baked goods at curfew to halls across campus. Only a few nights of vending took place, but the group got off to a great start, raising $240 in a single week.

“It’s cool to see people so happy to give money to charity,” noted Hutchins. “We’ve had lots of kids telling us to ‘keep the change.’”

But Hutchins’ role extended beyond that of fundraiser and race participator. Having experienced the tragedy of losing her mother to breast cancer when she was seven years old, Hutchins was asked to speak at the race about her experiences. “I’m not bitter about it,” she assured. “It’s just something that has been a part of my life for a while now, and it means I take special pride in this cause.”

Slade too spoke at the event, describing his father’s continuing battle with cancer. From someone who was previously uninvolved in the cause, Slade noted the turn-around in his participation. “Last year I wasn’t even involved in the Relay for Life, but this year I’m on a committee, starting a team, and really feel like I’m contributing.”

For those who took little part in this year’s Relay, or wish to continue helping with the cause, there’s still hope for next year. To learn more about how to get involved in the larger campaign against cancer, visit the American Cancer Society’s website at www.cancer.org and be sure to stay tuned for announcements about future opportunities on campus.
American Cancer Society :: Information and Resources for Cancer: Breast, Colon, Prostate, Lung and Other Forms. Web. 15 May 2011. .