You need to enable JavaScript to run this app.
Sports
Wayne Berger Has Entered the Building
marlen morgus 12 online editor
April 28, 2011
No Comment 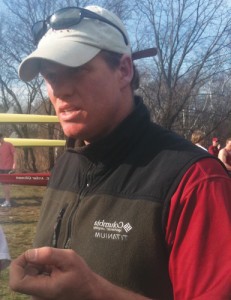 Names like Kryzewski and Paterno are thrown around the college basketball and football worlds as symbols of success and evidence of great coaching. Imagine if, as a member of the basketball or football teams, you were informed that one of these all-time greats was coming to coach at Deerfield. That is how members of the crew team felt when Wayne Berger ’84 joined the school’s varsity rowing program.

Mr. Berger began his coaching career at Groton School, founded the now enormously prestigious Boston Rowing Club for high school rowers and finally made the leap to coach at the collegiate level with Harvard University. He has coached boats to the most sought-after prizes in rowing, including the Eastern Sprint Championships, the Intercollegiate Rowing Association National Championships, US Club Nationals, the Royal Canadian Henley, the Cromwell Cup, and the Royal Henley Regatta.

The Scroll caught up with Mr. Berger to ask him about his coaching history and his hopes for the future.

WB: Interestingly, there aren’t that many differences…Technically, it’s very similar…I would say that girls aren’t as strong in their upper bodies as men, but I do think that women are inherently more able to relax and are actually more coachable than men are.

Scroll: What are you looking forward to this season?

WB: I’m looking forward to getting better every week and the squad becoming a team and the boats becoming crews, and I’m looking forward to people trying to do something they haven’t done before, row harder, row better, row faster, and if that means winning some races, great, but I’m a lot more about the process than the product.

Scroll: What is your vision for the future of the program?

WB: My hope for the future of the program is to go to [a higher] level, and that [means] building a culture where people are willing to go outside of their comfort zone and make the necessary sacrifices to produce fast boats. I would love to see Deerfield be perennial contenders for NEIRAs and nationals, and I’d love to take [crews to the Henley].

Berger’s arrival at the boathouse has come with a wave of focus and productive intensity. Dance parties have turned into “movement prep” sessions, up-to-date video from each practice has made its way to the official team Facebook page. The hardworking team has caught on to Berger’s powerful enthusiasm, and they eagerly await a season of racing under such renowned coaching.