You need to enable JavaScript to run this app.
Features
Arriving as a Stranger & Leaving as a Member of the Community
charlotte allen 14 editorial associate
April 28, 2011
No Comment 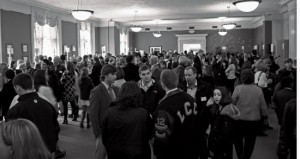 One would think that the few inches of slushy wet snow that made an appearance on the first revisit day would have affected not only the mood, but also the general feel of the day, but this was proven wrong in the comments of visitor Signe Alh, a student admitted to the class of 2014. “Everything about it was great,” she said, “from the sit-down lunch to the student panel to the welcoming students. I couldn’t tell you anything negative about my day!”

Each spring, admitted students pour onto campus, eagerly awaiting a sneak peek of a day in the life of a Deerfield student. Many current students may forget how terrifying it was to leave their parents behind to follow a complete stranger around for four hours, recalling only the excitement that caused them to leave the fear, and home, behind.

This year the academy hosted three successful revisit days early this April.
Potential students could not stop talking about the student panel that featured current students and perfomances by the Mello-D’s, Rhapso-D’s, and the acting tutorial class.

Margaret McGraw, younger sister of Maddie McGraw ’12, commented, “The whole day was very well-run and organized and made you feel like you were already a part of the Deerfield community.”