You need to enable JavaScript to run this app.
A&E
Song for the Dead Very Much Alive
sungmin hong 13 editor-in-chief
April 28, 2011
No Comment 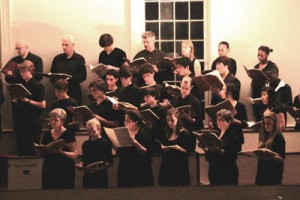 “Like open books,” began Daniel Roihl, music director, “our student musicians have been especially receptive to musical ideas and approaches, grappling with the technical and emotional challenges in a piece of such immense scope as Fauré’s Requiem.”

Student musicians, members of Deerfield’s chorus and orchestra, combined forces with ten faculty members to perform a major choral work inspired by the Roman Catholic Mass for the Dead on Friday evening, April 15, 2011, in the Brick Church.

Gabriel Fauré’s Requiem in D Minor Op. 48 is “one of mourning and petitioning on behalf of the souls of the departed, and by extension, for themselves as mortals,” explained Mr. Roihl.

“We look at a small section of the repertoire at a time, working with one or two isolated elements—whether it be intonation, diction, or ensemble sound,” commented Mr. Roihl. “My hope is that at the end of rehearsal, we put it back together and sum up the progress.”

“I was excited when I heard we were performing the Requiem, because it’s not the type of music most choruses have done,” said Sierra Janik ’13, soloist for the notable Pie Jesu movement (No. 4). “It is great to perform music most people haven’t heard of before to show them that it is out there.”