You need to enable JavaScript to run this app.
A&E
Eight Schools Act as One
stefani kuo 13 book reviewer
April 28, 2011
No Comment 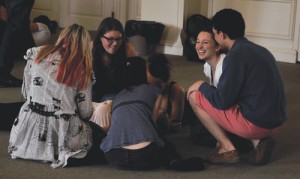 “Students are encouraged to foster a spirit of creativity and sharing among a group of eighty to a hundred young artists from the eight different schools,” explained John Reese, head of the theater department.

Filled with diverse activities ranging from mask work to dance combinations, the festival was the highlight of the weekend for the young thespians in attendance.

Due to the limited interaction of students in the theatre department at Deerfield Academy have with theatre students from other schools, “one of the benefits of the festival was that the students saw how much they have in common as young artists, and [they] all learned a great deal about acting and direction from the experience,” Mr. Reese explained.

At the end of the day, each school performed a ten-minute original piece. Deerfield students performed original elevator scenes written by students in the 2007 Acting Tutorial Class.

Though exhausting, the festival was an all-around success. Mr. Reese commented, “It is one of the most rewarding aspects of my job.”