You need to enable JavaScript to run this app.
A&E
Dubstep with Kochmen
delaney berman 12 staff writer
April 28, 2011
No Comment 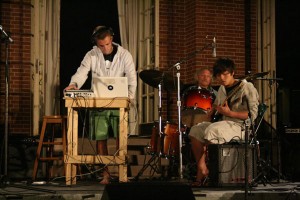 If you attended any recent dances or ever visit the DA-student-run blog soundabovetheseal.com, you are most likely familiar with dubstep.

If not, dubstep is a combination of beats, occasional vocals, and heavy drums with a deep bass born from reggae and London garage rock. Slightly less known, triphop is a pattern of hip-hop beats sans vocals, founded in England around the same time as dubstep.

Kwok and Cyr-Mutty enjoy these two genres because they rely upon creativity and individuality.

So, how does one actually create electronic music?

“It’s a little like DJing, sort of making a mash-up of songs but instead of just using a section of the song you can use all of the parts individually,” Cyr-Mutty explained. “And it’s all done live, like improv,” Kwok clarified.

The pair divide up the different aspects of the music making. “Kwok is in charge of the instrumentation and the guitar, and I manage the production,” said Cyr-Mutty, who uses virtual synthesizers on a computer program.

“Essentially, you repeat a beat or sound and then layer other beats or parts of songs on top. Some artists use sample tracks as bases, but we just use recordings of Kwok playing the guitar,” he said.

“We change up our methods all the time. Whenever either of us comes up with an idea, we just go with it,” he continued.

One year from their start, the duo, officially called “The Kochmen,” is getting more serious about their work.

This spring they secured an athletic exemption to work on their music in the hopes of producing a CD by the end of the year.

Cyr-Mutty confided plans of their future: “Once we have a CD done, we can send some of the songs to music blogs. If they like it, hopefully they’ll post it.”