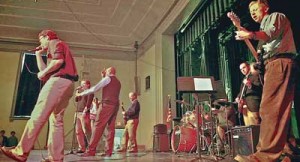 Now that the faculty band has increased its presence on campus by performing more often during school meetings, students have discovered their teachers’ talent outside the classroom.

Mr. Harcourt, the band’s guitarist, explained, “Though none of us are trained musicians, we enjoy playing rock and roll for fun.”With this easygoing attitude, anyone can join the band, and over the years, “Several headmasters, deans, and teachers from every academic department have performed on stage with us,” Mr. Harcourt recalled.

Beginning in 1980, the faculty band consisted of teachers who got together for a talent show and formed the “Punkadelics.”

“I joined the band the following year… when a couple of the faculty members wanted to play rock and roll on a more regular basis,” Mr. Harcourt said.

However, the band’s audience is not limited to school meetings. They also played at Stoneleigh-Burnham dances, where Mr. Dickinson worked at the time.

The band has performed on campus, at local concert halls, and at and restaurants such as The Yellow Sofa in Northampton, and at benefit concerts such as the Woodstock Revival and the Relay for Life last spring. They have stood the test of time.

Dr. Cullinane, a lead singer in the band, praises his fellow band members:“They’re very special to me because when we get together, we let it all hang out and nobody judges.”

“I look forward all week to singing with the band on Thursday night!” said Mr. Barnes. Mr. Harcourt agreed: “That’s pretty much how we all feel.”

Their current repertoire consists of about fifty songs, and the Deerfield community hopes they will continue to rock on for a long time to come.