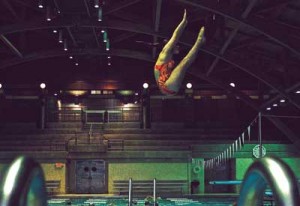 The Deerfield Academy boys’ and girls’ diving teams, two of the strongest in New England, are in the midst of one of their best seasons ever. They hold outstanding rankings among their New England competitors and are fervently preparing for the two most important meets of their season.

In every meet but one, the girls’ team has dominated the podium, placing first, second, and third. The boys have followed close behind as Taylor Clough ’13 has placed first in every meet this season. It was only against the indomitable Andover team that the girls lost their first and second place spots for the first time, while Danielle Denunzio ’12, a two-year veteran diver, still came in third.

Under the leadership of Denunzio and Clough, the unofficial captains, the divers have much to celebrate this season.

Although diving is its own entity, the team’s stellar achievements at every meet aren’t isolated. “Diving is an event in a larger swim meet, just like the 50 free,” said Denunzio.

Judges award points won by individual divers according to the place they receive- six for first place, four for second, three for third, two for fourth, and one for fifth. All points earned by divers contribute to the total scores of each school’s swim team.

“At times, the diving team’s points really make the difference at a meet. Since we usually place first, second, and third for girls and first and second for boys, it really helps the swim team out to have a lot of points,” said Denunzio.

Deerfield’s diving success doesn’t only come from the team members’ exceptional talent, but from the expert coaching of Mary Ellen Clark. A former Olympic bronze medalist in both the 1992 and 1996 summer games, Ms. Clark “encourages us to ‘jam on it’ and push our hardest,” said Marina Vranos ’12.

“She’s enthusiastic and won’t take no for an answer. She’s seen Olympic diving, and she knows what it means to be a good coach, and most importantly she knows how important it is to be a classy athlete,” added Vranos.

Along with Ms. Clark’s time and effort, the chemistry, excitement, and progress of the team is also a result of internal motivation. Kellam Witherington ’12 explained the dynamic relationship between the boys on the team.

“Taylor really brings a lot of experience to practice. I think it’s a good balance. He’s the technical coach and I bring a lot of emotional support,” Witherington said.

Georgina Hutchins ’12 concluded, “We have basically the same kids from last year, and the new ones fit in really well and also bring a lot of experience from home. We’re very fun-loving, but very serious when we need to be.”

And the team will need to be serious as they head into the final stretch of their season. This potent combination of team camaraderie, focused effort, and striking talent will culminate in the next few weeks as the Deerfield divers take to the boards against the best teams in New England and prepare, as the team mantra goes, to “NAIL IT!”