You need to enable JavaScript to run this app.
A&E
Artist of the Issue: Akshaya Avril-Tucker
caroline kjorlien 13 features editor
March 3, 2011
No Comment 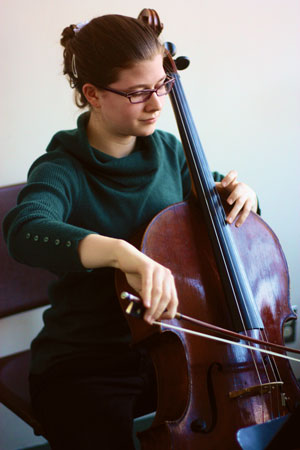 Akshaya Avril-Tucker ’11 “wears her many gifts lightly,” according to Peter Warsaw, who coaches her in Chamber Music. One of Deerfield’s highly talented cellists, “She gracefully balances a gentle, unassuming spirit with a fierce focus on the task at hand in a relentless pursuit of excellence,” Dr. Warsaw continued.

This past November, Avril-Tucker was accepted to Bard Conservatory of Music, one of the most prestigious music schools in the country. On top of their outstanding music program, “there are some great teachers and a great academic program” at Bard, explained Avril-Tucker. Still, she is waiting to hear from other schools before deciding where she will attend.

Having played the cello since age six, Avril-Tucker’s cello career now totals an impressive twelve years. She joked, “The first year or two were not that intense… but now I think I’m a bit more serious!”

Avril-Tucker prefers playing in groups for the most part: “It helps to play with other people; when you have friends in chamber groups and orchestras everyone can have fun with music together.” Then when it comes to independent practice, “The reward for solitary practice is huge,” she said.

Currently, her favorite piece is Brahms Quintet in F minor for piano and strings, which she is playing with Elisabeth Strayer ’11, Katie Yoon ’11, Emlyn Van Eps ’12, and Sha Li ’12.

A dedicated musician, she considers playing the cello to be her primary activity both in and out of school, for she is in Deerfield’s chamber music program and is exempt from other co-curricular activities to play cello most seasons.

Akshaya’s dedication is evident to all.

Van Eps , who has been playing with Akshaya for nearly eight years, said, “Akshaya plays wonderfully. She uses much emotion and movement. When she practices a solo part, she often plays just the first note five or six times, to get the sound just right. She has a sound that many cellists aspire to have, very rich and clear.”

Van Eps continued, “Akshaya is very serious while playing, and is disappointed if she or anyone in her group makes a mistake, but she is always ready to laugh and joke over a problem.”

Avril-Tucker’s favorite part of playing the cello is working with other musicians because she finds solo performances nerve-racking. She has come to realize that “the process of preparing a piece of chamber music is all about laughing, arguing and enjoying the split second when everyone comes together.”

Her musical talent seems to run in her family, for both her older brother and grandfather play instruments. For her, learning the cello has been family-oriented, and she admitted, “It was mostly my mom encouraging me to practice, which she still does sometimes.”

A dedicated musician, she considers playing the cello to be her primary activity both in and out of school, for she is a member of Deerfield’s chamber music program and is exempt from other co-curricular activities to play cello most seasons.

Avril-Tucker praised the music department, noting that it “isn’t that big, and I guess that’s what makes it stronger. There is so much individual attention, so many close friendships… I’ve learned so much about music here.”