You need to enable JavaScript to run this app.
A&E
Voices in Conflict: Speaking the Truth
tabata viso 14 staff writer
February 3, 2011
No Comments 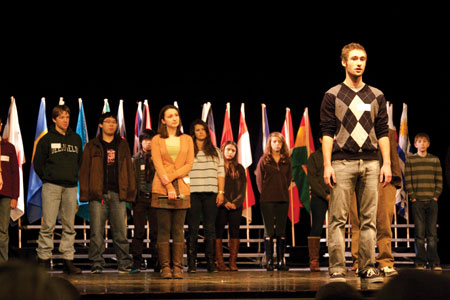 In the mind of Linda Kengne ’14, one of the actors in Voices in Conflict, “It is a play to make people aware. There is a war going on. Just because we don’t hear gunshots where we are doesn’t mean that there is no war. People are dying right now, and many Americans don’t even know it.”

The winter theater production, Voices in Conflict, is based on the words of American soldiers and Iraqi citizens, and it voices their experiences and hardships during the war in Iraq.

Director of Theater John Reese said he chose Voices in Conflict because “the play presents all viewpoints on the war, and is a tribute that honors the troops who make daily sacrifices on our behalf.The least we can do is to appreciate their sacrifices and those of their loved ones.”

The play “really interested me,” said Benji Reed ’13. “It’s an issue I didn’t know much about.”

The cast includes students who performed in the fall production, such as Jem Wilner ’11, Gabriela Espinosa ’12, and Elisabeth Yancey ’12, as well as new actors who have yet to participate in a play this year. The cast not only memorizes lines and blocking, but also watches documentaries, such as The Ground Truth, in order to understand the emotional aspects of fighting in a war and later returning home.

“The films made it easy to empathize with [the soldiers],” said Reed. “It really opened my eyes.” Combined with outside research on the war and on individual soldiers, these movies help immerse the actors in the setting.

“I was against the war before the play, and I still am,” reflected Thomas Shuman ’13.

The controversial subject matter led to a sudden banning of the play on the day of the play’s debut at Wilton High School in Wilton, CT in 2007. However, Mr. Reese noted, “We are just presenting information.” The play shows equal views on the war.

“It’s putting forth the words of the soldiers and making the audience think,” Shuman added.

With or without controversy, “At least the truth is being spoken,” Kengne said.

The cast will be performing Voices in Conflict February 15 through 19 in the Black Box Theater at 7:00 PM.