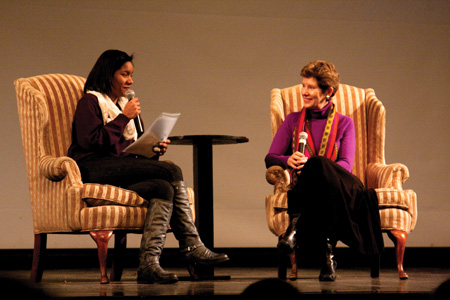 Each year in the month of January, the student body gathers in the large auditorium in remembrance of Martin Luther King, Jr.Conceived in 1997, the event continues to change every year.

Before 1997, DA had never formally recognized the day as a time for reflection.A student-led teach-in protest in 1996 proposed that the school create an official event. “Students decided that [a regular class day] wasn’t sufficient and that we should do more to recognize the significance of MLK Day,” said English teacher Mark Scandling.

The MLK Day faculty committee, with guidance from the Diversity Task Force, has been in charge of the day since its inception. Throughout the years, they have approached the format and content of the day from many different directions.

The 2011 MLK Day marked another approach to the still-evolving day. Tarah Greenidge, the new head of the Multicultural and Diversity Office, worked closely with students and the DTF to gather their opinions.

Ms. Greenidge said she wanted to “make a day where people didn’t feel preached or lectured at and were really able to live up to Dr. King’s legacy, which was about building community and helping one another.”

Tatiana Soto ’11, as president of the DTF, worked to achieve an MLK day assembly that appealed to the student body.

“I’ve seen in the past few years how unresponsive people are to the day, and I was in a position to change that,” she said.

The most significant change was the addition of musical group “At the Table with Dr. King,” which replaced the traditional speaker role. Ms. Greenridge and Soto discovered the group at the People of Color Conference in San Diego, California.

Rose Fisher ’13 commented, “I thought they were fascinating. This year’s MLK day was a much more youth-centric approach.”

The new format of the discussion groups also encouraged the students to become more active participants within their groups.

“I found from personal experience that people end up in awkward situations [in the old format], and if we made them all the same, everyone had something to relate to at the end of the day,” said Soto.

Other students agreed, including Emily Ng ’14, who said, “I liked the fact that I was able to express my opinion without feeling pressured to conform.”

Eleanor Parker ’11 commented, “The day provided a good opportunity not only to consider Dr. King’s contributions but to appreciate the talents and reflections of our own student body. It’s always fun to end an assembly on our feet!”