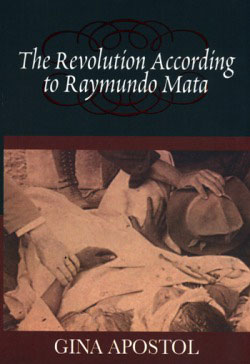 English teacher and novelist Gina Apostol received the 2010 Philippine National Book Award for Fiction last month for her work, The Revolution According to Raymundo Mata.

The novel, largely based on various Filipino generals’ memoirs and other primary sources, discusses the unsuccessful Philippine Revolution through the eyes of a partially-blind general, Raymundo Mata, who proves more concerned with reading and writing than with war.

According to Ms. Apostol, the fictional memoir centers on a “shadow version of a real Filipino national hero…a poet and writer killed by Spaniards.”

In writing the novel, Ms. Apostol thought about “[her] country from a distance.” “Every story can be told in so many ways,” said Ms. Apostol, remarking that the best known versions of war stories are usually those told by the victors. She looked to share the story of “all the other people”: the Filipinos who lost the war as Spain sold the country to America.

Indeed, according to the Philippine National Book Development Board, Ms. Apostol’s novel is “a firecracker of words,” and “affirms, if it still needs to be affirmed, the power of fiction to shape and reshape the gaps in the narratives of our history as a nation.” Luis Francia of the Philippine Global Nation Inquirer praised the work as a “construction of the past that is still there.”

Faced with the challenge of writing on Philippine history while in America, Ms. Apostol intended for the novel “to be read back at home.” She sought to reconnect with the people living in the Philippines, “bringing back the stories of [real] generals and heroes to Filipinos who don’t read them.”

Receiving the Philippine National Book Award for Fiction, a prestigious prize not awarded last year, helped inform Ms. Apostol that she achieved her goal of writing about Philippine history for the Philippine population. “It feels good to know people at home are reading and valuing the novel,” said Ms. Apostol.