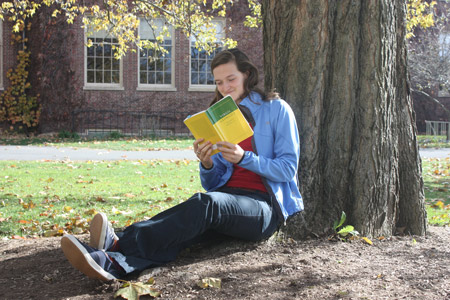 Sitting in Latin V with five seniors last winter, Eleanor Parker ’11 realized that she would be the only student left to continue with the language next year. But the absence of a Latin VI course didn’t stop her from pursuing an Advanced Tutorial with the Latin faculty. While looking for a topic, Parker remembered the Aeneid fondly and decided on Virgil’s Georgics.

A poem in four books, the Georgics are a guide to farming. “The Georgics are a complex work and it’s a lot of political allegory because it was written just as Octavian was about to ascend to the throne,” said Parker. “They have little gems of philosophy. They’re not totally didactic.”

Latin teacher Sam Savage came up with a practical complement to the reading. The tutorial meets Tuesday, Thursday and Friday. During previous long blocks, Parker and Mr. Savage tended a garden of broccoli rabe, arugula, and scallions. Now, they use the period for interviews with local farmers as well as covering more ground in the poem.

The garden and interviews fit in with the theme of the first book: crops and harvesting. The other books (in order) cover trees and vines, livestock, and bees. Books one and four are considered the most significant, and one and three and two and four have parallel structures.

With only two people, this tutorial requires much more work than a regular class does. “With other classes it is up to the entire group of kids to make up what happens during class-time. This is all on my shoulders so I have to be really thorough,” explained Parker.

“It feels more like a project than a class,” added Mr. Savage, “which is what I wanted. I’m not really teaching so much as we’re doing this together. The goal is to end up with more questions than we came in with.”

Many would ask, why bother learning a language you can’t speak? Parker explained that it’s not about communicating through the language. “I’m learning the philosophy and the foundation for western culture, which actually I feel connects me more deeply with other people. Looking at Latin in a lot of ways is more relevant to today’s world than other languages,” she elaborated.

The tutorial is split into two different sections. Mr. Savage will take the first two terms with the Georgics, and Parker will continue the tutorial with Latin teacher John Burke in the spring.

“Ellie and I plan to read the Agricola by Tacitus,” said Dr. Burke. “Tacitus’ prose meditation on the career of Agricola should provide insight into how the second element in the old republican ideal of agricola/militans—farmer/soldier—played out in the early imperial period.”

The Agricola is a biography of Tacitus’ father-in-law, who governed the province of Britain and extended the Roman dominion, but was put to death by the emperor Domitian. Tacitus, a famous historian, writes some of the more challenging Latin, but Parker is up to the challenge.

She said, “I’m really grateful for this. It will be the big bang to end my Deerfield career.”