You need to enable JavaScript to run this app.
A&E
Artist of the Issue: Tony Andreas
sungmin hong 13 editor-in-chief
November 11, 2010
No Comment 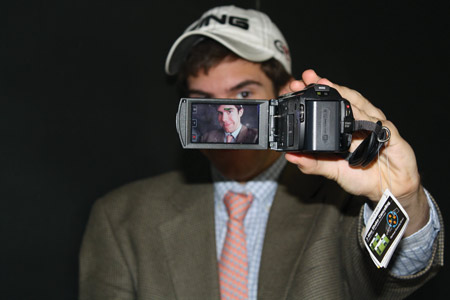 After a term of videography and a night of The Departed and Lucky Number Slevin, the actionadventure thrillers that inspired him, Tony Andreas ’11 was eager to create and direct a film of his own, Time is Money.

Every weekend this fall, a diverse mix of actors and crew members from Deerfield and Andreas’s native Northfield rehearsed. The group included Aaron Cyr-Mutty ’11, who acts in the advanced acting tutorial.

According to Andreas, the editing process took up a tremendous amount of time, usually an hour per scene, but even more challenging than editing was congregating. “The hardest thing was getting everyone together at one time,” admitted Andreas.

Time is Money features a gambler addicted to cocaine, a local mob hooked on gambling, and the protagonist, Aaron, whose task is to avenge the murder of his school roommate, Chris.

Due to his cocaine expenditures, the late Chris owed the mob a tremendous amount of money. Consequently, the boss of the mob sends two mobsters, Aaron and Tony, to collect the cash, but the mobsters end up shooting Chris in their pursuit of the money. Aaron witnesses his friend’s murder and decides to take revenge.

Action-packed scenes involving payback and blackmail make the movie gripping and intriguing. The film concludes with a surprising death, instigated by hidden greed and drug addiction, that shatters loyalty between two partners-in-crime.

Andreas explored money and time and their interrelations. “Time is money,” he said, showing great understanding of two of the greatest influences on today’s society.

Through themes of greed, revenge, and addiction, Andreas’ film comments on human nature as well.

The production required a fall athletic exemption, as well as an independent study with videography teacher Tim Trelease. Andreas hopes that his film can be screened at local film festivals in addition to school meeting or the Widdies in the spring term.