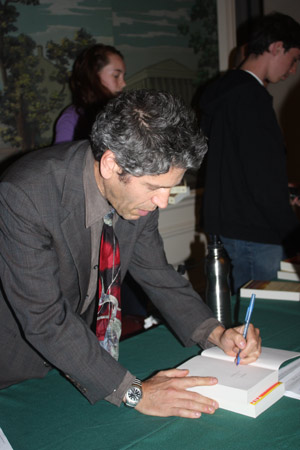 Paul Loeb, author and activist, spoke about citizen responsibility, prompting a heated discussion on climate change denial, at the first Academy Event of the school year on October 28.

Introduced by Student Council President Ellie Parker ’11, Mr. Loeb addressed many pivotal questions surrounding social activism and responded to these questions with stories of the most committed and involved social activists of our time, including Archbishop Desmond Tutu and Rosa Parks.

Mr. Loeb encouraged students and faculty to emulate these activists, to be accountable, and to speak out about controversial topics including climate change.

“You really want to start now even if it is just in relatively small ways, because the more you do, the better the base you’re going to build from this point forward,” said Mr. Loeb.

He provided an example by pointing to the potential conflict of interest between financial donors and a school’s institutional policy, directly referring to the donations of David Koch ’59 to the construction of Deerfield’s science center and swimming pool that bear his name.

“I hope that a school who takes the money to make David Koch a lifetime trustee wouldn’t intimidate people from challenging powerful interests,” said Mr. Loeb.

At the end of the meeting, Head of School Margarita Curtis thanked Mr. Loeb for encouraging the students to act on their convictions, but she felt it was important to make it clear to everyone in the audience that “we are not, have never been, and will never be a donor-driven school. Deerfield receives donations from alumni and parents on both the left and the right of the political spectrum, but at no point in our history has any donor, including Mr. Koch, attempted to influence school policies or what we teach in the classroom.”

Dr. Curtis underscored this idea, saying that “To suggest that this has been the case any time in the past, or that we are vulnerable to this kind of influence, is inaccurate and demonstrates a lack of understanding of the Deerfield culture and of the honorable intentions of our donors.”

Mr. Loeb’s call to be persistent, ethical leaders for positive change resonated with many students and faculty.

“I believe many students were moved by his message. He truly inspired us to take action instead of waiting,” said Gaelen LeMelle-Brown ’11.

The question and answer session that focused on the issue of climate change demonstrated students’ awareness. Mr. Koch, who allegedly does not agree that climate change is a pressing issue and has received recent negative publicity, including a New Yorker article by Jane Mayer, was brought up as well.

At the end, the speaker pointed out the need to find some base line of mutual agreement. “I was intrigued by his story about how Moveon.org and the Christian Coalition, two organizations that typically disagree, worked together to preserve Net Neutrality,” said Academy Events Chairman and math teacher Nils Ahbel.

Mr. Ahbel also reflected on the importance of the Academy Events in general. “One important purpose of an Academy Event is to get our community talking about important issues. I believe Mr. Loeb was successful at doing exactly that.”

David Koch also sits on the board of public television and may have had a hand in killing a documentary called Citizen Koch. If true, this is a conflict of interest in which David’s will became the board’s policy decision. If true, he failed a test of leadership by using power granted as a member of the board for personal reasons. It also runs counter to, I presume, his libertarian views on speech.

My question is this: Is David Koch’s position on climate change sincere? (Bryce Lambert would kill me for this next sentence.) If not, if it’s self-serving, if he uses his resources to gain influence and control of state legislatures, governors, US representative and US senators to advance policies, including rigid opposition to policies that mitigate climate change and his position is self-serving and cynical, then he has no business being on the board.

It’s hard to imagine that a man with his training in science could have a sincere belief that climate change is not man-made and not an existential issue for mankind.

David Koch makes billions on petrochemicals,and other resources that can be drilled for, excavated or mined, then refined and marketed. Gas and Oil, when burned, produce green house gases that heat our atmosphere and fuel powerful storms that cause great damage at great cost in property and lives. David Koch funds organizations that deny science of climate change and organizations that design and market climate denial curriculum to public schools. His paper plants pollute water with neurotoxins (like mercury) in Arkansas. His company notoriously stole oil from an Indian reservation. If a Deerfield student did these things, they would be expelled.

The questions isn’t what kind of influence David Koch exerts on Deerfield’s board. I’m sure he’s brilliant, or whether he “has supported Deerfield with great generosity, loyal service and deep affection,” the question is why Deerfield gave David Koch a unprecedented, unique and extraordinary lifetime seat. Answer that please. What it his largesse? I regret to say I believe Philip Greer is not being straight about that.

Did Deerfield turn a blind eye to David Koch’s economic and political enterprises that are not public-minded but self-serving and in fact, harmful to others? Deerfield can’t have it both ways when it comes to character and it seems that’s exactly how Deerfield wants to have it. If so, it’s corrupt. And if it’s corrupt, it’s not worthy of our heritage.

The board and Margarita Curtis should address this promptly. Philip Greer and David Koch should recuse themselves and agree to abide by the decision.

Mr. Koch, like many of the greatest philanthropists in history, is also an oft maligned figure in the American political machine.

This does not muddy his contribution as the greatest benefactor of Deerfield Academy in its history, his commitment to its mission (which all on this board I assume support).

An effort to suppress political discourse at the Academy by Mr. Koch would of course be worthy of criticism.

But the criticisms that arise are never related to his activities as a Deerfield trustee, but rather as a political financier, which are obviously unrelated.

To focus on the latter is an insult to his generosity.

i don’t see a problem with students, parents and alumni questioning how the school is being financed. afterall, no one wants to send his kids to a school financed by activities that he finds dishonorable and immoral.

i also see why some may think Koch’s involvement with Deerfield is politically motivated. when i was in deerfield, the Bushes and Patakis were in attendence for graduation (97 i believe). it is plausible that Koch is using deerfield to network with some very powerful people in politics.