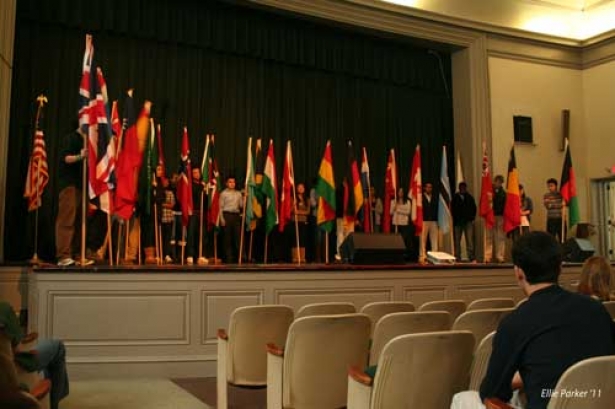 In addition to honoring the life and work of Dr. Martin Luther King Jr., this year’s MLK Day program examined “what we do at Deerfield as a community for diversity and multiculturalism,” said College Advisor and Assistant Director of Multicultural Affairs Ayodeji Perrin ’97.

Mr. Taulbert, founder of the Building Community Institute in Tulsa, Oklahoma, is a long-time friend of Director of Annual Support and Development Operations John Knight ’83. “When we first met in 1995, I thought he was just a writer,” reflected Mr. Knight. “Then I heard him speak, and thought he was a storyteller. Then I got to know him and realized…he’s an amazing individual.”

In his keynote address, Mr. Taulbert reminded the community that everyone, of any age or profession, can help “build community.” Through numerous personal anecdotes, he explained the eight main themes outlined in his book, Eight Habits of the Heart, as they apply to community.

Since the theme of this year’s MLK day program was community, Mr. Taulbert’s experiences and messages “can be useful to us in particular,” said Mr. Knight. “Anyone from any ethnic background can find in their own lives examples of what he’s talking about. You hear him talking about you.”

Claire Hutchins ’12 easily recalled that Mr. Taulbert’s stories reminded her about “the dedication of parents and guardians, and how much out of the way they go for you.”

In addition to the new community building workshops led by Mr. Taulbert for students and faculty, the day featured other additional programs. The number of community service projects offered during the afternoon increased, which Senior Associate Director of Admission and Assistant Director of Multicultural Affairs Debra Dohrmann hoped will become “a standard part of MLK day.”

The Poetry Slam, another addition to this year’s program, and open to everyone, invited students and faculty to share their ideas and interpretations of community though poetry.

An Alumni Fishbowl included “alumni coming back to share experiences,” said Mr. Perrin. The public discussion allowed current students and faculty to watch alumni reflected on their experiences at Deerfield and in college regarding self-segregation, diversity, and relationships. These alumni included Rehema Kutua, Michael Carter, Stephanie Gaillou, and Paula Bennett.

Dr. White, Ms. Dohrmann, and Mr. Perrin planned for an especially full day. “We have a great, fertile environment for reflection and discussion,” said Ms. Dohrmann, and predicted, “We hope the community jumps into the day ready to take advantage of it.”

According to Mr. Perrin, the objective of the various afternoon discussion groups was “not just to reflect and think, but to come up with action plans to move forward.” As the faculty speaker Jaed Coffin, this year’s Wilson Felow, reminded us in his address, “diversity is always about looking forward.” Discussion groups were asked to set concrete goals regarding issues of multiculturalism, gender, leadership and socioeconomic status on campus.

Gonzales commented on the shift of this year’s discussions from the previous race themes to those of community. “Community is something everyone can talk about,” said Gonzales, who participated in a discussion group focused on community at Deerfield. “The discussions were a lot more productive.”

Inspired by the Alumni Fishbowl, Gonzales’ group decided to work to create a “Senior Fishbowl” in the future. “It would let freshman see what seniors would have changed or kept about their Deerfield experience,” said Gonzales.

According to Mr. Perrin, MLK Day is “an opportunity to get re-inspired, to use what we learn to go out and do our own work.” As Mr. Knight reminded us, “the messages of MLK Day are for everyday.”